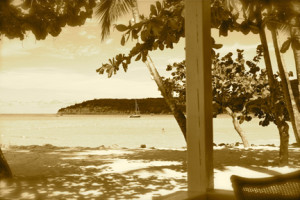 Have you ever had a time where you knew somehow that God was right there in your presence, speaking to you in your anxiety, but yet in the most unlikely, even laughable way?

We were returning home from speaking in St. Vincent and a few days of rest in beautiful Bequia. Having taken advantage of a four-hour layover in Antiqua to get a cab to an ocean side restaurant where we ate lunch, it was time to catch a cab back to the airport.

We walked down the beach and cut beside an ocean-side bar bustling with bikini-clad women and tanned men, where we were told there would be cabs. Dave and I were keeping our heads down and moving fast. We were running late and my heart was heavy (more in just a moment).

Suddenly I noticed a black man with dreads and a large black cowboy hat off to the side, a tall, older man with a time-weathered face. He yelled out to me in a raspy voice, “Hey do you need a cab?”

I ignored him because solicitors in foreign countries are just a little scary to me.  I wanted to pick which cab we took from the parking lot—a very modern sleek one that oozed comfort and air conditioning.

I picked up my pace.  Hearing a voice behind me, I glanced over my shoulder to see with just a little dismay that the man was right behind us, insisting…“Hey do you need a cab?”

Honestly, I probably would have ignored him, but my good-hearted husband said, “Why as a matter of fact we do.”

I sighed a little inside, as we followed the man to not the nicest van.  Still a little unsure, I looked for the yellow taxi license and my spirit lightened. I wasn’t getting in an unmarked car, that much I had firmly decided.

I took note of the big crack in the front windshield, circling out like a spider web.

As the driver got in he said softly, “Praise the Lord.”

“Could you turn on the air?” I asked, as I settled myself into my seat, admittedly self-focused.

“Ah, when we get going you will have air,” he said with a laugh, as he rolled down his window. Glancing at me in the rear view mirror, he added, “Now give that window latch a push beside you and you will have a breeze.”

The one-inch space it opened up wasn’t exactly what I had in mind.

Glad to be on the way to the airport, I relaxed in my seat and listened as my husband bantered back and forth with McCoy (the name on his shirt).

Yep, this is where I live.  But not always.  I have a degree in woodwind technology from Sioux City, Iowa.

“As a matter of fact, I lived in Memphis for ten years. But my main playing has been done in churches. Oh, yes,” McCoy drawled in his gravely baritone voice, “I play soprano saxophone at church. I play piano and harmonica. But my main instrument would be the… trombone.”

The singsong way he said the name of the instrument made it sound majestic. He chuckled.  “As a matter of fact, I have a harmonica right here.”

With his right hand on the wheel, he started shuffling with his left hand through some things in a compartment near the floor. “Now don’t you two worry,” McCoy intoned. “I can drive just fine with one hand. I won’t be wrecking while I play this.”

As he fumbled for the harmonica, we went up and down hills with brightly colored cottages and wove round corner after corner. I didn’t feel the least bit at risk.

“Got it,” he said with laughter in his voice. “See if you know this one.”

Pulling the harmonica to his lips, he played a few bars. I immediately recognized, “It’s a wonderful world.”

After he finished playing the song once through on the harmonica, he began singing it in slow, Louis Armstrong like jazz drawl.  The words wowed me.

I see trees of green, red roses too
I see them bloom, for me and you
And I think to myself
What a wonderful world

I see skies of blue, and clouds of white
The bright blessed day, dark sacred night
And I think to myself
What a wonderful world

The colors of the rainbow, so pretty in the sky
Are also on the faces, of people going by
I see friends shaking hands, sayin’, “How do you do?”
They’re really sayin’, “I love you”

Yes, I think to myself
What a wonderful world
Oh yeah

Somehow I felt like he chose the song specifically for me. Dark sacred night.  “It’s a wonderful world, Robin.”  Was God himself saying through this harmonic playing cab driver…“I love you”?

You see, as I alluded to earlier, before we got a cab, before we met the harmonica-playing jazz cab driver, even as we were eating a delicious lunch by a beautiful turquoise sea, I had been struggling.

My highly sensitive, introvert soul was weary from travel and speaking. I was exhausted from a scant 3-hours sleep the night before and a vivid nightmare.

Although just the day before I had told Dave I had one of my most peaceful days ever, it seemed the peace had flown. When Dave asked me how I was doing, I tried to open up, but it came out as a list of every possible thing to be stressed about.

“Enjoy the day, Robin,” Dave said. “Let each day take care of myself.”

Instead of being comforted, I felt accused and guilty for casting a dark cloud over the beauty stretching before us. The truth was that I came to the cab in need, but not at all sure what I was in need of. I felt new tears well up, tears of gratitude.

When the cab driver finished his song, Dave and I clapped, and I asked, “Do you do this for everyone?

“Oh yes. The good Lord gave me a gift, and I figure it’s my job to share it with the world.” As soon as the word “world” left his lips, he pulled the harmonica for a five-note exclamation point.

Dave asked, “Will we need to pay you more for this?”

McCoy laughed, “Well, that would be up to you, but I never turn down what I am given,” afterwards blowing another three notes into the harmonica.

“You’d like this one too,” he said, launching into, “When the Saints Go Marching In.”  After he played several choruses, he began to sing again. It was as if he knew that I would again need the words.

As the lyrics massaged my accused heart, the yellow in the car came into sharp focus to me, McCoy’s yellow shirt with the words “Plan A” on his back, the 1-ft. high neon yellow letters spelling TAXI in the front window. I looked down and saw the seats were covered in a royal blue embossed velvet-like material.

Suddenly, I remembered a large black man in a red t-shirt that said, “Trust God,” who came to me and my sister when my mom was dying (see chapter 10 of Secure in Heart). A man who I later decided might have been an angel. A chill ran up and down my back.

Stunned, I looked up to see a paper air freshener in the shape of a tree hanging from the rear view mirror, and took note of the words on it, “Be refreshed.”

“Thanks so much,” I said, not sure if I was thanking the cab driver or God himself.

“Oh yes,” he drawled. “Music has a way of soothing the soul. Especially when it is well-timed.”  Again he blew out a five-note crescendo.

The harmonica punctuated his words, urging me not to forget that these words needed to be taken to heart.

McCoy slowed down the car, and took a turn that took us slightly away from the airport.  I was surprised, of course, not too worried. In McCoy’s mind, our time together wasn’t quite ready to be done.

Then he pulled up his harmonica for one last tune and the notes of  “How Great Thou Art” wafted from the front of the cab, soothing in their jazz rising and falling, sometimes trembling as if the notes themselves carried awe.

Then McCoy took the harmonica down from his lips and began singing How Great Thou Art in his deeply soulful, voice.

Dave began to sing along with him in bass. Knowing that this was my surrender to God’s peace, I softly added the alto line.

I think of God,
His son not sparing,
Sent Him to die,
I scarce can take it in;
That on the cross, my burden
gladly bearing He bled and died
to take away my sin

Were we really worshipping in a cab in Antiqua?

As we finished singing, he slowly pulled up to the airport.  By now, I was rehearsing his sayings in my heart, not wanting to lose them or the clear messages meant for me.

“God bless you folks,” McCoy said. “My, it is good to be with Christians.”

A few minutes later as McCoy drove away from the airport, I asked Dave…“Did that really happen?”

By the time we arrived at the airport, something had changed inside of me. I looked at everyone I could, caught their eyes and smiled.

I was completely present, and it seemed that every moment, every person I saw was in full color, rich with meaning.

Thank you God for appearing in the mundane and the majestic.

Thank you for God for coming in the form of common folk, harmonica-playing cab drivers in bright yellow, Plan-A t-shirts and black cowboy hats.

And most of all, thank you God that your appearing calls me to be better. To see, really see, people as you see them.